The Importance of Being a Chicken in London.

Deinocheirus, eat your heart out… look at the size of this magnificent work of art! Never a theropod relative have been seen reconstructed so… big! And by children! 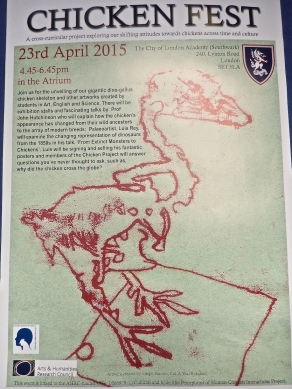 Chicken Fest at the City of London Academy (Southwark, Southeast London) was developed as an art project under the direction of Ben Frimet, the creator of the Chicken Sculpture . Chicken Fest  tried to understand and emphasise the place of the ubiquitous and familiar avian within human culture…  Believe it or not, under Ben’s direction kids between 10 and 13 were ultimately the artists responsible for these marvels… from chickens made of plastic cutlery and cardboard to poems and paintings.  We took a trip between fast food and a critical approach to mass slaughter  culminating with that piece de resistance that was that immense, awesome skeleton at the atrium.

Made of papier mache and wood it was one remarkable way to celebrate  the most indispensable dinosaur of them all. 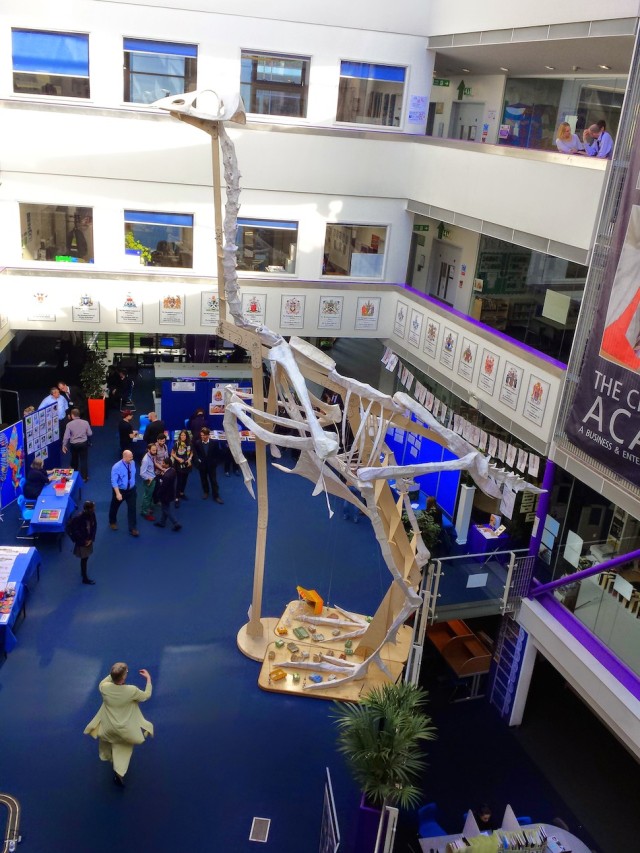 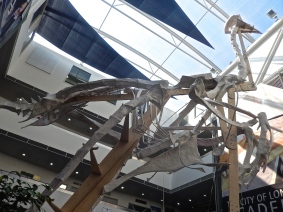 In Ben’s words: “Art teaches students to be curious and look at the world sideways, It also encourages them to become active learners who make a difference by doing. Art can be linked to all subject areas to enrich learning and furthermore, subject areas that collaborate are truer reflections of the way the real world operates”. Couldn’t agree more!

And yes,,, John Hutchinson and myself were there invited to  show how important the dinosaur link is still in our lives! Chicken fun anybody? 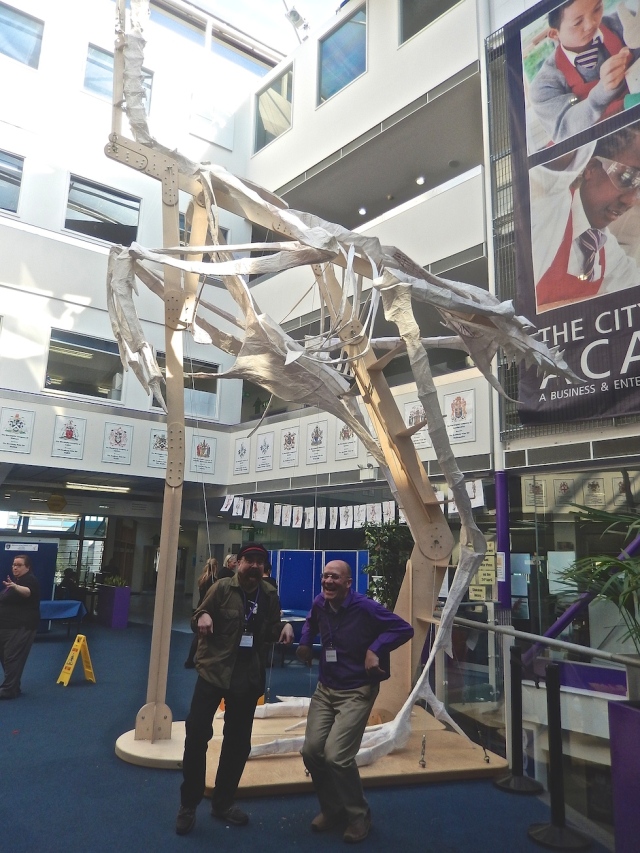 Fast food taken for granted… and the mass slaughter of tasty innocent dinosaurs! The exhibition covered everything and distilled the enormous creative talent of the kids. 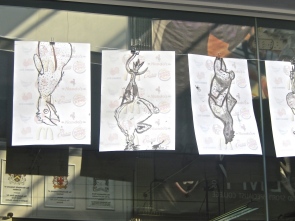 We also had to thank Ben Frimet and the London Academy the opportunity to show our stuff,,, here Carmen and myself are dealing with our stall as usual, prior to the talks…  Carmen was delighted to had several kids from her library coming to say hello!

And needless to say, John Hutchinoson, the Biomechanics “Ace among aces”, the man responsible for ‘slowing’ T. rex (providing evidence, not special effects!) was also there  (with team mates) showing among other things a comprehensive variety of bones and casts  … including a downsized 3D photocopy of a T. rex femur (in red)! 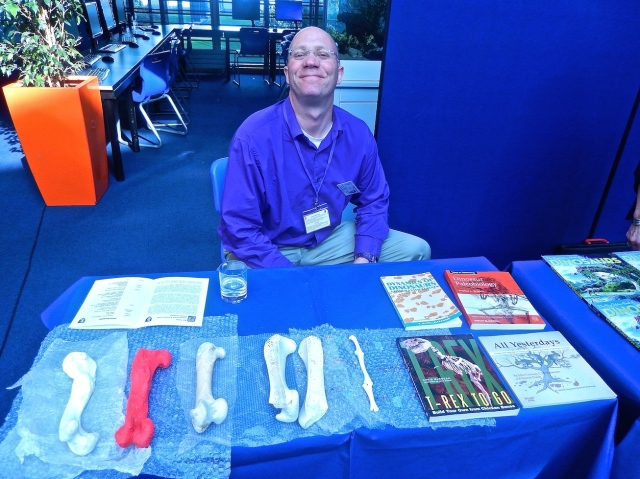 We definitively had a great time, before and after the event… Ben Frimet  and also John are enjoying Dinosaur In Your Face here 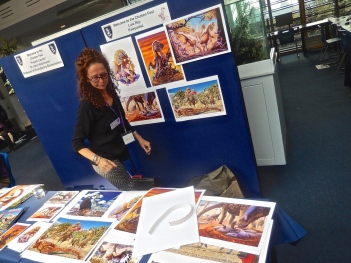 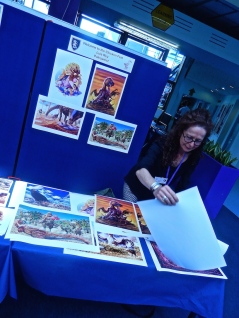 And John Hotchinson continued  with his scientific expertise and naked chickens..,! 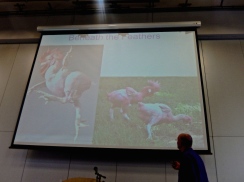 By the time it was my turn I could only take a short trip on how the dinosaur image became more and more chicken- like… despite all the odds, Archeopteryx was recognised as a feathered dinosaur and (size-wise) at last we found a seven-metre feathered  tyrannosaur! Chickens before chickens… we wouldn’t be here cooking the small ones if the big ones hadn’t died out! Needless to say I had to show my “Chicken Run T rex” collaboration with John Hutchinson… it fit perfectly well with the spirit of the event. 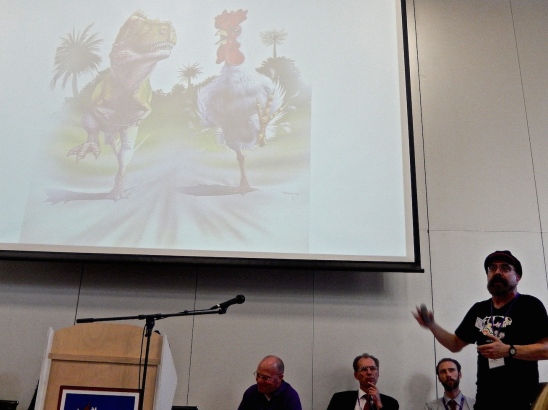 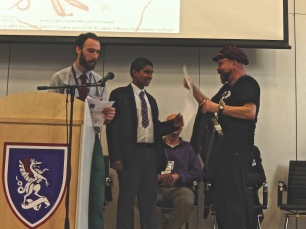 The school rightly awarded Ben Frimet  for his efforts as coordinator and in turn I was allowed the privilege to award each one of the younger artists involved with one print of my artwork. If only in my days at school I ever had a homework like they have had!  I hope their efforts will be rewarded by keeping the artwork and possibly show  it somewhere else… I shuddered at the possibility that (given the fragility of the materials) it might get destroyed… but fortunately that will not happen. I couldn’t think of a better ornament for an atrium… apart from another dinosaur skeleton that is! 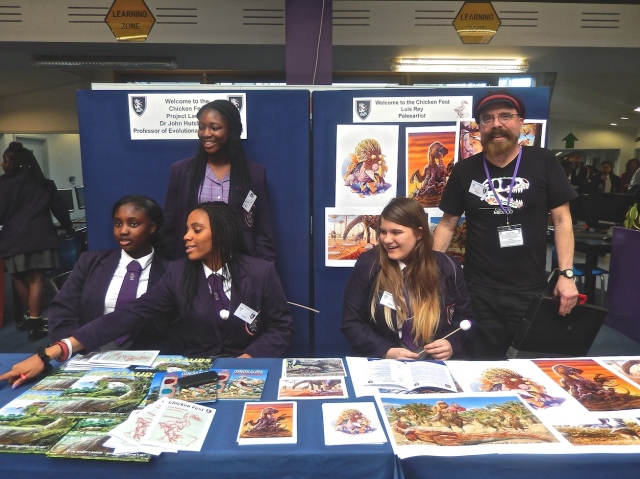 I’d like to thank once again Dr. Naomi Sykes, Principal Richard Bannister, Rick Benton and Marcus Huntley and all the teachers and staff  of the City of London Academy and specially Ben Frimet  for their hospitality and special care of this event… we felt right at home! 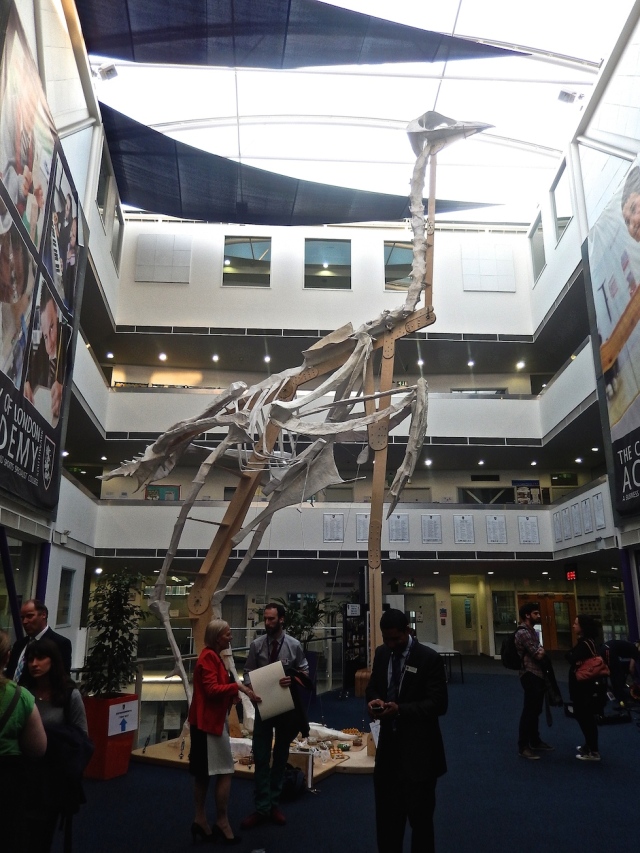 4 Responses to The Importance of Being a Chicken in London.