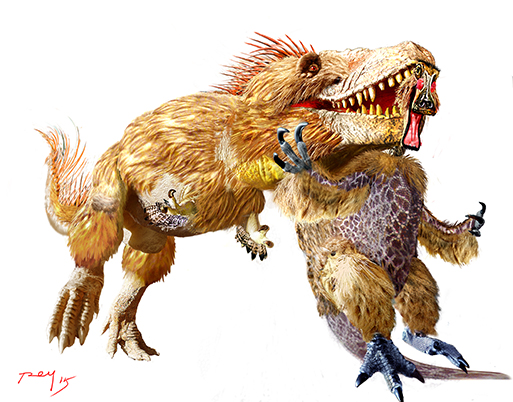 The excitement of  the epic Mike Kelly “Super Predator, the World of T. rex” continues unabated. After finishing the series about Alamosaurus and T. rex, the new chapter I’m illustrating now refers to the possible scenario of  the predator/prey relationship of the famous Mongolian Cousin Tarbosaurus and the monster claws of Deinocheirus (continuing a subject I have been covering before and that is dear to my heart). What you see here is a composition of a juvenile Deinocheirus being finally snatched by an adult tarbosaur… If this is a juvenile you can  imagine the size of    the adults, much bigger and bulkier  than Tarbosaurus itself!  It is interesting to note that for many it is still difficult to visualise the true proportions of this enormous animal as shown by the new discoveries… the  2 meter arms look puny compared to the bulk of the body!

The series will include also a nesting Deinocheirus herd, but this will belong to the still unfinished last battle scene.

Every scene follows the story line and, in a sense, it is much more satisfying that doing simply a “comic”. I can dwell much more in the detail!

2 Responses to Meet the new protagonists…!