The John R. Hutchinson Team does it again… in NATURE.

Embargo lifted and here we are…Kudos to John R. Hutchinson! He has made it once again and this time in the prestigious science magazine  NATURE. Hutchinson is not only a man of science, but also a man with imagination and sense of humour, so needless to say it is always a pleasure to work with him. This time it was time to tackle Nature with an article about the evolution of the posture from early crocodilian forms to birds (with dinosaurs in between). His remarkable 3D restorations and animations showing the evidence of posture change had its hilarious moments for me (for the sake of clarity, the crocodile looked like vary funny airplane). It didn’t take long for me to come with this “tree of life” idea using some intermediate forms before embarking on flight…. well almost, I’m sure some will object to see this T.rex hanging out on a branch… and as a feathery sort-of porcupine… I must be joking..!

In any case, the sequence we selected to illustrate the evolutionary suquence was a crocodile, Marasuchus, Coelophysis, T rex, Microraptor and Enantiornis.

It is not the first time John and I haveollaborated together. He is noted for his research  in estimated mass and the relationship with kinetics (specially in big extinct animals). A while ago I illustrated his now notorious article debunking the possibility that T. rex was a fast runner… an article that annoyed a few, but simply and scientifically stated the obvious. Mass and gravity matters and T. rex was not simply an oversized chicken or a “roadrunner from hell”! 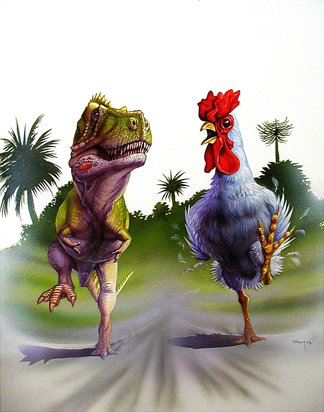 So we are back to NATURE…Since the article unfortunately didn’t make it to be the cover of the magazine, here you have it (as an exclusive) logo included and all!

4 Responses to The John R. Hutchinson Team does it again… in NATURE.