Almost 20 years ago the book Extreme Dinosaurs, a compilation of artwork I had done from 1988 to 2000 was released. It was a novelty mostly because the colourful approach to dinosaurs and the de-facto depiction of feathered dinosaurs for wider audiences. I had stood on the shoulders of the giants of Palaeontology from the Dinosaur Renaissance and spread my creative wings. It was a wholly personal project that would have found objections in the whole world of publishing  and most probably never would have been published, if not for publishing “madcap” houses like the defunct Chronicle Books..,. however that book opened the possibilities of my participation in many projects for 20 years AND it is still fondly remembered by some. 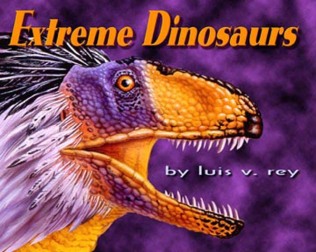 Again 20 years on, and the new madcap publisher is yours truly. I have decided to start a Kickstarter project to fund the publishing of my wholly new EXTREME DINOSAURS II, THE PROJECTS.  This time a compilation of most of the artwork I have done for exhibitions and  both the science and technical  background of how and why they were done.

The Projects are four, from the more general to the more specific. I created and put together Dinosaur rEvolution with Peter Norton and Gondwana Studios… the intention was to show a collision of skin strategies between Theropod and Ornithischian dinosaurs, in which only one group would survive extinction in the shape of Aves. Scales and protofeathers would give way to flight feathers… scales and quills would give way to plates, horns and armour. At the end all illustrated by a lavish combination of skeletons, casts and murals. The approach is somewhat controversial… but so has been most of my work all my life!

The second project is related to Archaeopteryx and Maniraptora... also part of the collective exhibition Feathers Fly; The Art of Archaeopteryx, organised by  Silver Plume Exhibitions.

The third one paradoxically started it all: murals for Hatching The Past, the now famous travelling exhibition by Stone&Co well known all over the world.

The fourth is a thorough explanation of how we made Dinosaurios Hechos En Mexico… -murals and all- widely reviewed in this blog stage by stage for a long time: from its inception to its apotheosis in the exhibition at Monterrey’s Planetario Alfa and accompanied by the essential skeletal drawings of Mexican Dinosaurs by Angel Ramírez.

The book would seem to many a simple excuse to show “paleo art”… but I’m hoping it is much more than that. Science and art all converging together  and mixing seamlessly.

Since again it is a very personal book that no publishing house has been able to take on board, I decided that to preserve the original concept and intention, the only way it would have been properly published is by yours truly. With your support this might become a reality. You might have seen some of the art inside the book before in this blog and elsewhere… but this time there will be a  full account and explanation of how and why it was done… and there’s no substitute to have a proper, printed book in your hands, instead of watching a computer screen… at least that is how I feel!

In contrast to the original Extreme Dinosaurs,  Extreme Dinosaurs II, The Projects is 140 pages of all new or revamped full-page artwork and the murals spread all along on some of them. The printing is going to be on good paper and the first edition will be  hardcover.  The project also includes some special gifts for contributors… like personalised B&W sketches of your favourite dinosaurs on demand. It is indeed as an ambitious endeavour.

We hope not to disappoint… Suggestions are welcome  You may like the new Extreme Dinosaurs… or perhaps not… but it won’t leave you indifferent! So, would you like a copy and see my own version of the latest crazy dinosaur stuff in your hands? Please go to:

Here are some page samples…