Tyrannosaurus rex has been depicted in every possible guise we can imagine… the next reconstruction always pretending to be more accurate than the previous. It is the favourite dinosaur par excellence. So I decided to have another try… a new possibility based on some beautiful pictures of vultures I have seen. Might not be that original and perhaps is a work in process… but I also attempted (timidly) to give it a beak instead of the usual lizard/crocodile snout. Given that the latest thinking covers most of the teeth, instead of lips I added a horny coverage. Indeed, the attraction of T. rex has always been the display of the powerful banana sized teeth in all their glory.

However, in my casts of T. rex jaws it is evident that even if they are fully fitted inside their sockets  (that in most of the skulls are not), there is a good part of the tooth inside soft tissue (being gums or something else) quite distinct from the enamel, that is supposed to be the visible part. In this reconstruction there >is< a T. rex skull behind all the external coverage. 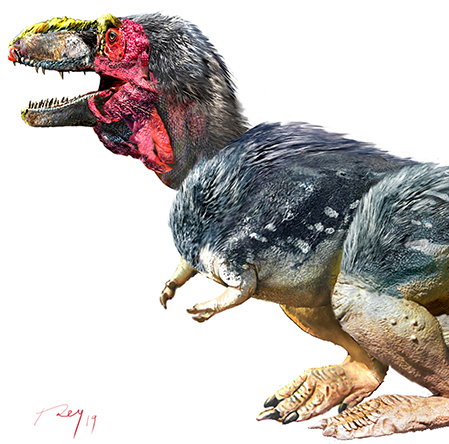 I have always opted   for the crocodile smile and overlapping upper jaw with the teeth in full show… this may not be the case although we might be proven wrong once again. In the meantime, for your perusal, here’s yet another trial on how T. rex may have looked while having a restful banquet.

Paleo Illustration
View all posts by luisvrey →
This entry was posted in tyrannosaurs, Uncategorized and tagged aves, Triceratops, Tyrannosaurus rex. Bookmark the permalink.