7500 visitors in two days can’t be wrong… ! After the preview in my last blog,  we have had the opening of Dinosaurios Hechos En México. As this little photo tour shows,  I think Planetario Alfa and Gondwana Studios have excelled in the set up of this exhibition. 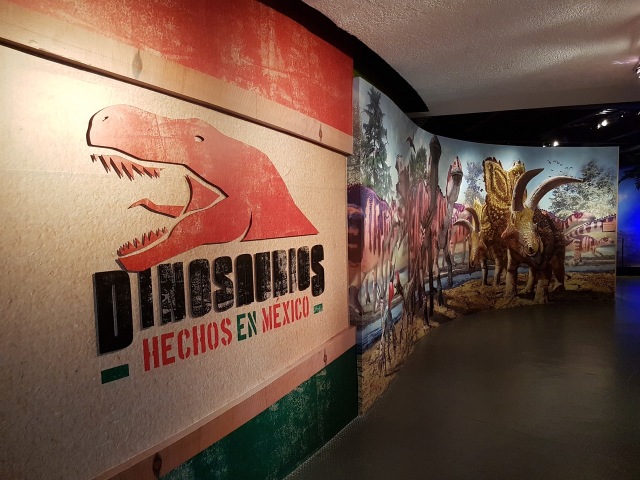 For me, the main aim was to highlight a  the enormous amount  of carefully researched information on Mexican prehistory that most of the Mexican public is not regularly  aware of. There is no arbitrary sampling of dinosaurs here.  Care was taken to name and give credit to all researchers whose discoveries were featured.  Given the circumstances and scope the task was always bound to be incomplete though… but we tried our best to select the elements that would be most popular. And dinosaurs have no competition!  Obviously, the animatronics (as adequate or inadequate as they can be)  and the  trademark of Gondwana Studios (and StoneCo) exhibitions  of adding  playground  sandy areas for children, where they learn to excavate hidden fossil treasures, just add to the popular attraction in the whole. 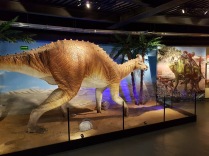 Casts and fossil material are scarce and difficult to find or borrow.  However,  the murals fill in and interact with the exhibits, guiding you into the world of the main Mexican dinosaurs: Coahuilaceratops (and its animatronic counterpart and skull cast) in its Parras Eden landscape with the hadrosaur Latirhinus.  The Aldama ceratopsoians, Huehuecanauhtlus and Tanycolagreous. Totlmimus and  the (possible) Mexican T. rex.  Agujaceratops attacked by a tyrannosaur and surrounded by nodosaurs and titanosaurs.   We had the fortune to have the skull cast of the best known Mexican hadrosaur Velafrons attacked in the mural by dromeosaurs and given the animatronic treatment too. There is a massive Magnapaulia herd attacked by albertosaurs,  the Parras hadrosaur and the  “Sabinoaurio”. Even Yehuecauhceratops came in two versions: the animatronic one, looking more like Héctor  Rivera-Sylva‘s traditional one, and the mural reconstruction  based on my collaboration with Angel Ramírez.   The contrast of the animatronic tyrannosaur and my own tyrannosaur murals (Labocania with its colourful feathers and  a feathery T. rex against the grey nakedness of its counterpart) couldn’t be more evident here… and is striking. Face to face.  I think it works in a kind of provocative way! Great food-for-thought to tickle the audiences. 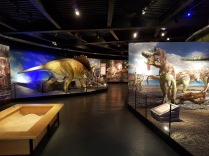 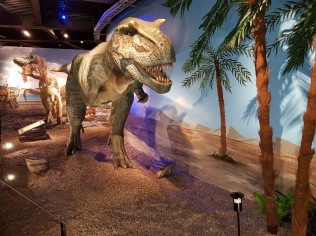 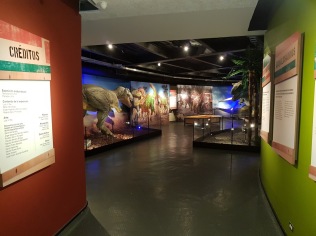 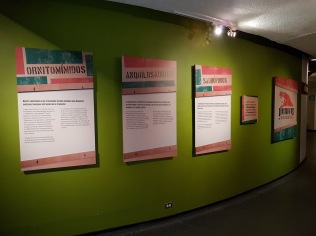 If you look carefully even the Mexican heteredontosaur and coelophysid are present. The exhibition harbinger is this fairly well-sized animatronic sauropod (purportedly a titanosaur…) and the exit corridor is surveyed by the only pterosaur of the exhibition.

But what really counts is the public… and the reaction has been massive:  I got news that there were 7500 visitors in only the first weekend. Can we ask for more? The Mexican audiences deserve this and more… impeccable organisation!  Thanks to all of them we can say “mission accomplished!”. 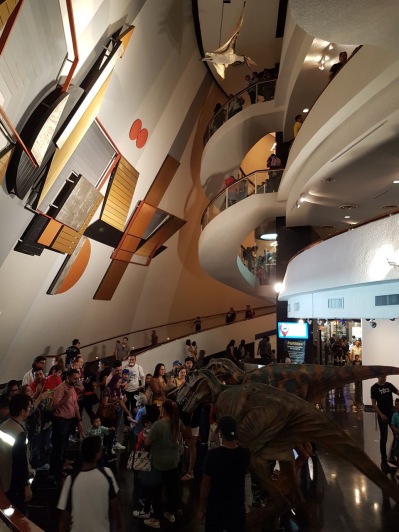 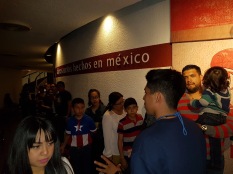 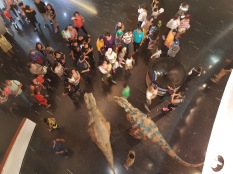 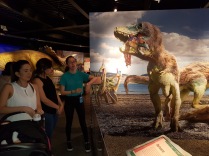 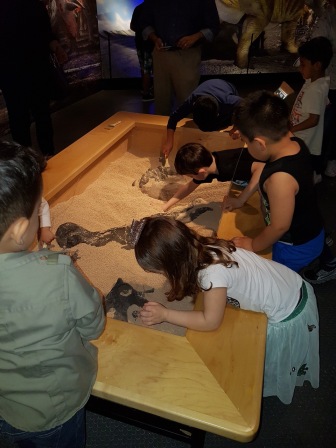 Special thanks to Rosy Bustindui for these great photos…and special thanks also to  Peter Norton of Gondwana Studios and Planetario Alfa that did such great job mounting and printing the murals and making this exhibition a really dignified effort for all the people in Mexico… and at the same time opening an educative space like no other, guiding them right into the enigmatic Mexican Prehistory. Hope to see you all there in October!