Intermission after Mexico…more inspiration for “Paleoart”. 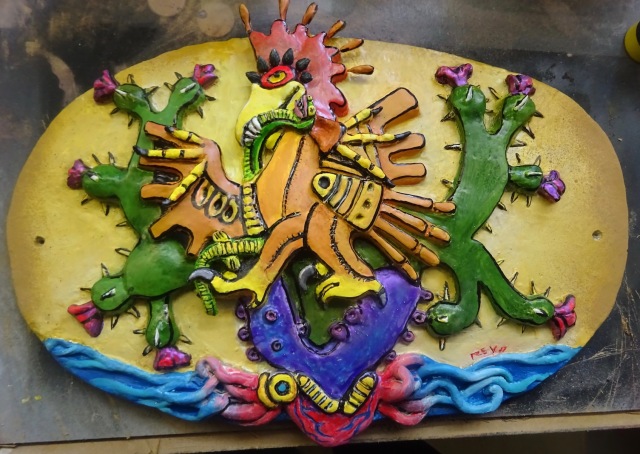 And this time for real… No helping Diplodocus restorations, no talks, no scientific accuracy… only  surrealism. Hope you can excuse indulging once again in my taste for Pre-hispanic Art and the fact that I keep turning  to use its influence for some of my own paleo-interests . Yes the famous Aztec symbol of the eagle and serpent over a cactus (in remembrance of the legendary origin of Tenochtitlan, the Mexica capital, famously used as the Mexican flag’s national emblem) has been of special interest for me over the years. On my annual visit to Metepec near Toluca (Edo. de Mexico),  inspired and aided by  the workshop of Israel Soteno and Blanca Jiménez, and with their priceless help,  I decided to do some more clay work inspired by a Prehispanic design I’ve seen years ago… and once again the raptor would go back in time and become a Veloci-raptor , while the serpent would have the tiny legs of a Cretaceous one. The cactus is being “vomited” by a yet even more surreal version of Tlatecuhtli, or Mother Earth ( considering how volcanic is the soil…”Atom Heart Mother”?), representing an island surrounded by the veins of water from the lake. 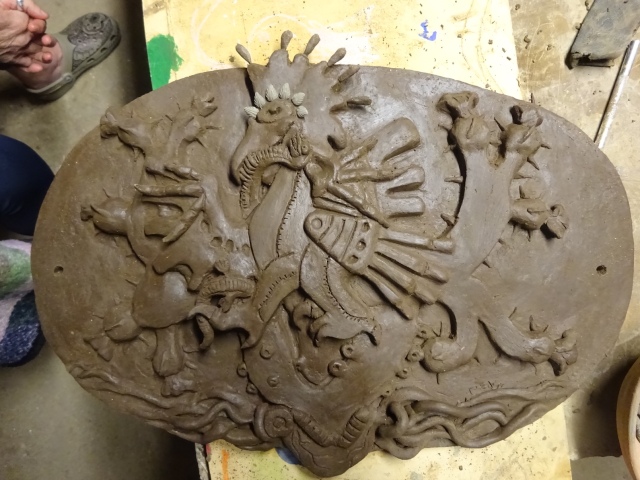 I show here three stages; No. 1  still fresh and wet. As with all traditional procedures, things might go wrong… and they did:  the piece broke while drying before being burned in the massive oven… then it further broke while bringing it home to London so I had to mend it, reconstructing it with different kinds of cement and glue.

No. 2 shows it already painstakingly reconstructed and with an enamel coating to start painting it.

No. 3  is the piece finally painted very much in the style of a three dimensional Aztec Codex, a style I learned to apply on clay from Carlos Soteno (see here the previous example I did together with Carlos two years ago in a much more traditional rendering).

The  Codex pictorial literature  tell  us the life and history of the indigenous Americans and look to me as  precursors of  contemporary comics and picture books.  A colourful, playful language that became very much part of my childhood and younger days in Mexico, and that I’d like to pay tribute to once again… and this  time recounting what might have been Prehistoric Mexico using familiar, traditional symbols!