Remember this? When I did this restoration of Sereno’s outlandish Spinosaurus, I could’t wait to hear the complaints… there were some but not as many as I expected!

Now I have just purchased the new 1:40 scale Spinosaurus from the Collecta label… and guess what? Not only they have done a very decent popular toy model of Sereno’s reconstruction… could it be  that they also heeded my advice!?…  So far I have not seen anyone else reconstructing the quadrupedal Spinosaurus with an outwardly bending hand.

There is something inherently wrong  with a “knuckle walking” dinosaur without proper adaptations to such specialised trait … just as it is completely wrong to reconstruct Deinonychus or any maniraptoran  with pronate hands.  We all know that radius and ulna were locked parallel to each other in all theropods… consequently the wrist started modifications so the hands could rotate sideways… a process that permitted, eventually,  the evolution of the  wings of a bird. 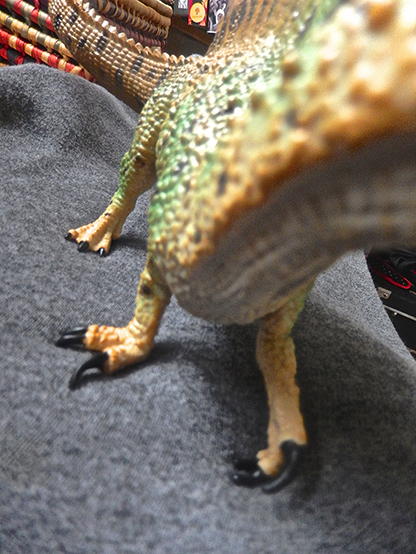 Alan Gishlick demonstrated to me a long time ago that all theropod hands could also bend slightly outwards. We need a more serious study of the Spinosaurus hand… in the meantime, if the new Spinosaurus would try to walk with  hands bending  inwards (as it has been generally depicted lately),  it would have to use the wrists to touch the ground!… that seemed absurd to me,  so the bending outward was what I applied to my “walrus” Spinosaurus… and that is precisely what Collecta has done with its new model! I want to believe that my idea had something to do with it!

It may look outlandish and quite extraordinary (and I also question the fact that such puny legs could actually be useful for walking on land the way the model does)… but you have to agree that this is the right way to get our collective popular imagination into a real scientific debate… is it possible or not?  Can this monster be too much of a monster?  At least is not deformed according to  Hollywood’s expectations, but according to real scientific work. It might be flawed or not… but after the recent Jurassic World attempt to blow Palaeontology apart,  this little toy made me renew my hope that popular science is not completely lost to mass-marketing pressure …. needless to say I’m looking forward to apply some of my own colouring to the model  it in the near future!