Nanotyrannus… is it or is it not? 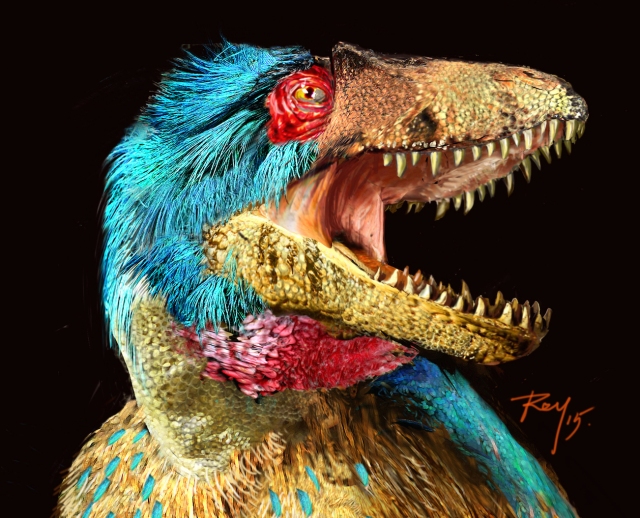 Nanotyrannus  was considered  as a different tyrannosaur species right from its discovery (especially by Robert Bakker). However, soon his status started to oscillate between different tyrannosaur and  a juvenile Tyrannosaurus rex. This has always been a source of  hot debate. We have had a recent long  discussion triggered by the always provocative  Mike Kelly that went on and on for what seemed ages without reaching agreement!. After Nanotyrannus came “Jane“, another source of tyrannosaur debates… Famous sculptor Tyler Keillor commissioned me to do a feathered “Jane” a while ago, which I did with pleasure. This is traced on top of its skull.

Even if I have seen some opinions that keep confusing Jane and Nanotyrannus’ ,  I consider that both  are different animals, and many people agree now that Jane is indeed a juvenile Tyrannosaurus, while Nanotyrannus is a mystery tyrannosaur that fiercely battles ceratopsians these days, thanks mostly to the extraordinary discovery of a mortally wounded Nanotyrannus  entangled with a ceratopsian (probably Triceratops although that is also been debated between an unknown ceratopsian and Chasmosaurus) both encased together  in rock for posterity.

It is not the first time that I have done Nanotyrannus… I did this cute, tongue-in-cheek, portrait of him a while ago for some friends as you can see here…

Time flies! To celebrate such mysterious tyrannosaur I continue these days  the tradition in a more contemporary fully feathered, skull corrected light, this time for a mural in our next exhibition with Gondwana Studios (more on that later),,, after consulting with the foremost expert in dinosaur anatomy Scott Hartman (his skeletal reconstructions know no rival these days, see Scott Hartman’s Skeletal Drawing), I came about with this ensemble of Nanotyrannus versus Stygimoloch… not completely finished and no background yet, just the joy of feeling  action captured in mid air…!

2 Responses to Nanotyrannus… is it or is it not?