Hatching The Past in the Catalonian Pyrenees! 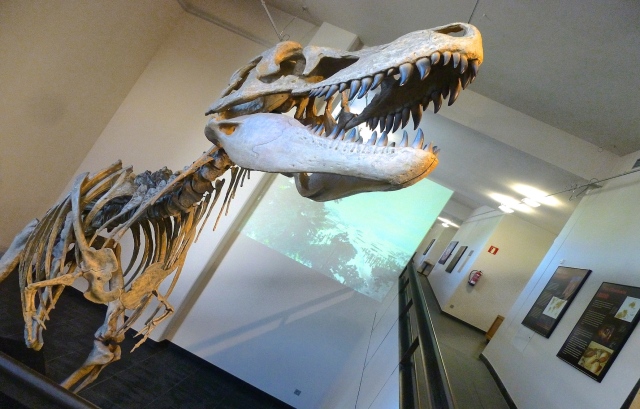 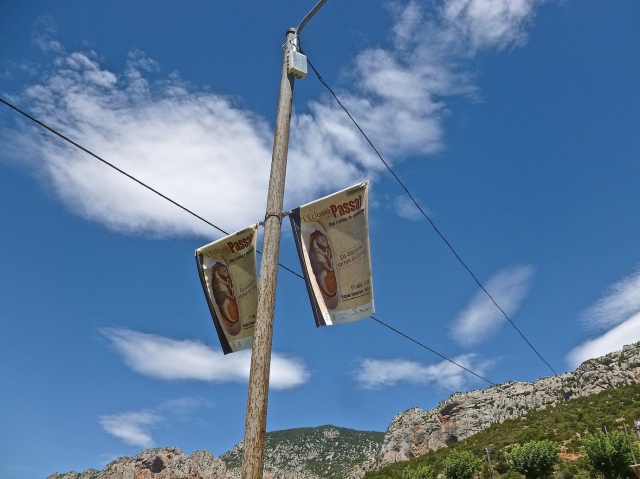 For the first time in a long time, Hatching The Past, this time known as: “L’ECLOSIÓ DEL PASSAT: OUS I CRIES DE DINOSAURES” , arrives home. Yes, the ESPAI DINOSFERA DE COLL DE NARGÓ in the Catalonian Pyrenees boasts the privilege of actually being the greatest egg site  in Europe… what better place to host this remarkable exhibition! 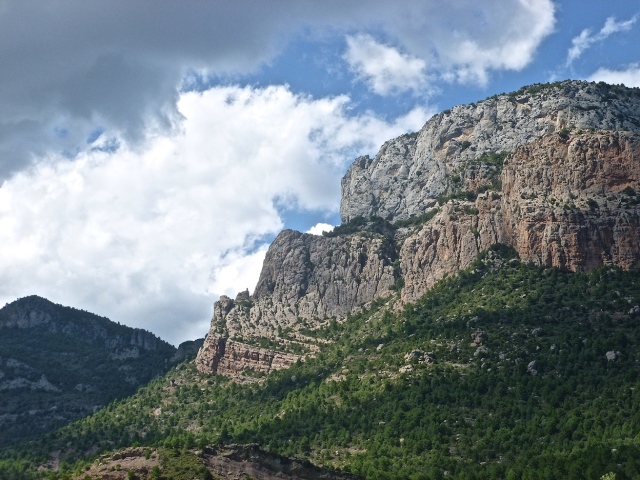 As usual, the installation hero  was Peter Norton… curator extraordinaire  of the exhibition and the man responsible for bringing Hatching The Passt to Europe. 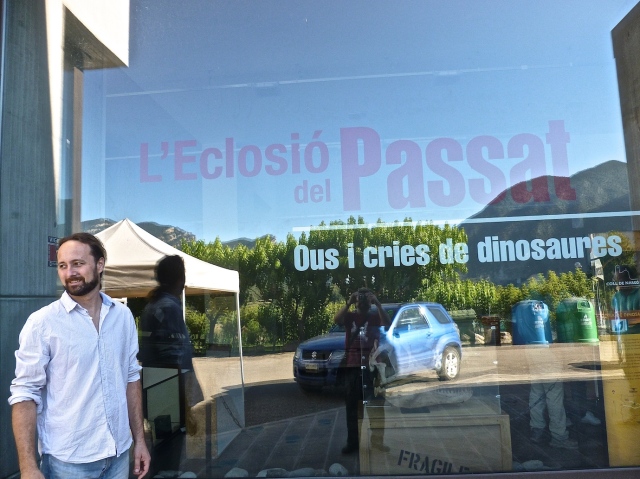 … and this time he had the special help of no other than Charlie Magovern, discoverer of the famous “Baby Louie” Gigantoraptor hatching inside the egg while preparing it. He together with Flo Magovern are Stone Company, originators of the exhibition. It is difficult to think that such an exhibition was mounted by these two folks alone and in such small space of  time. 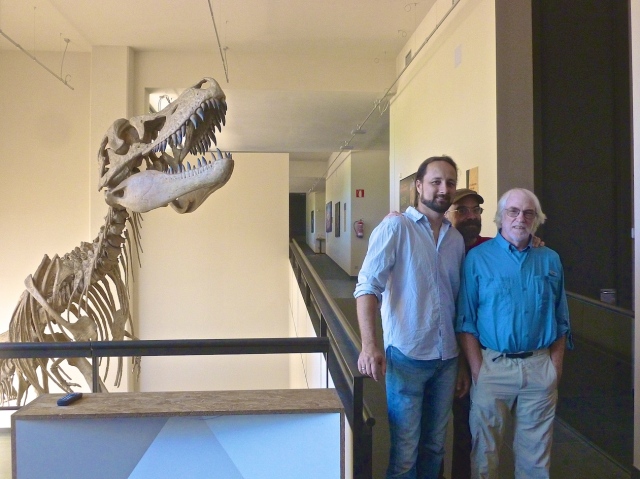 Everybody agreed that the small museum building acquired a new dimension by their efforts (even the designer of the building himself told me so!)… and the scenery was simply stunning! 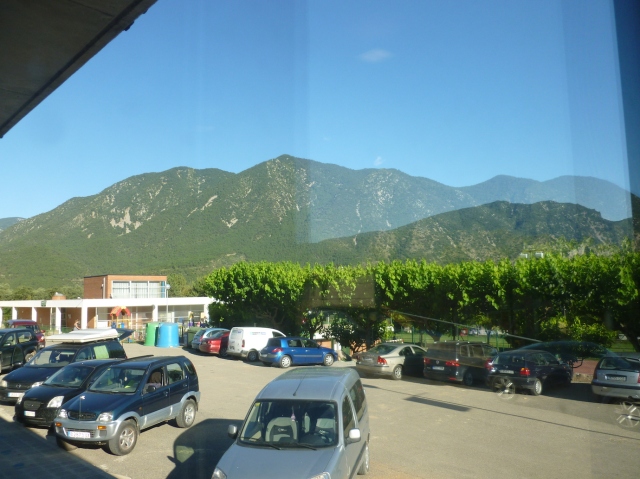 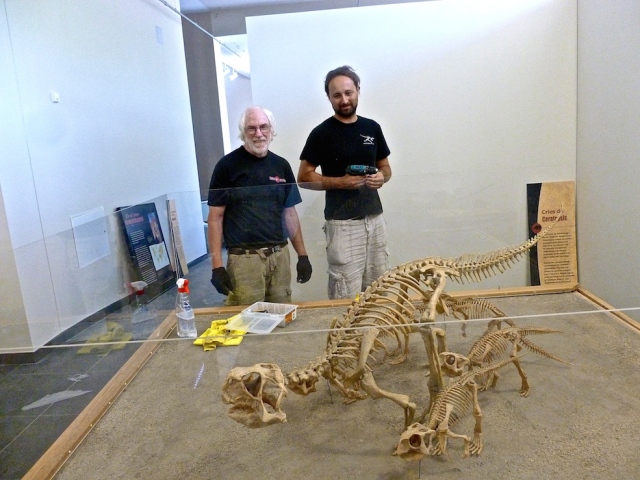 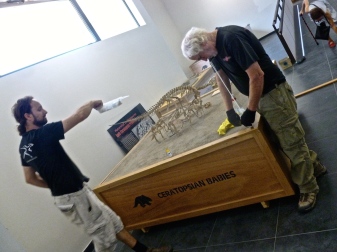 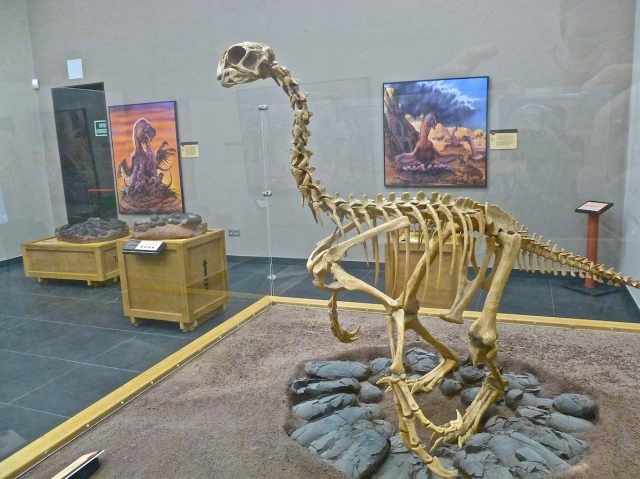 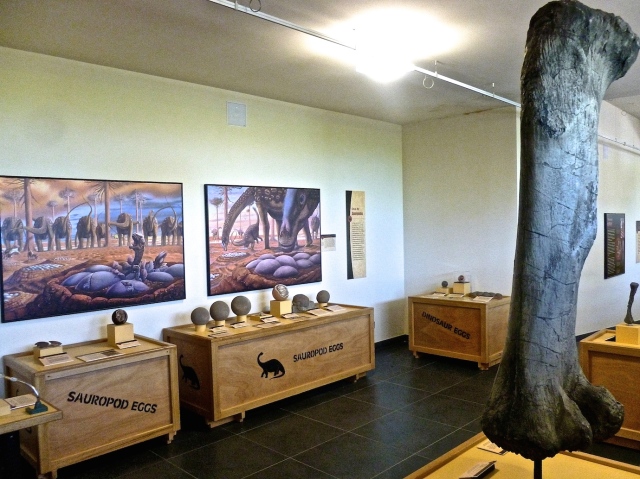 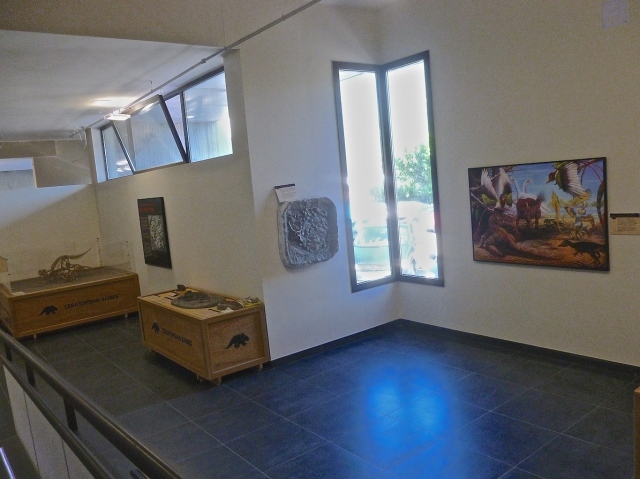 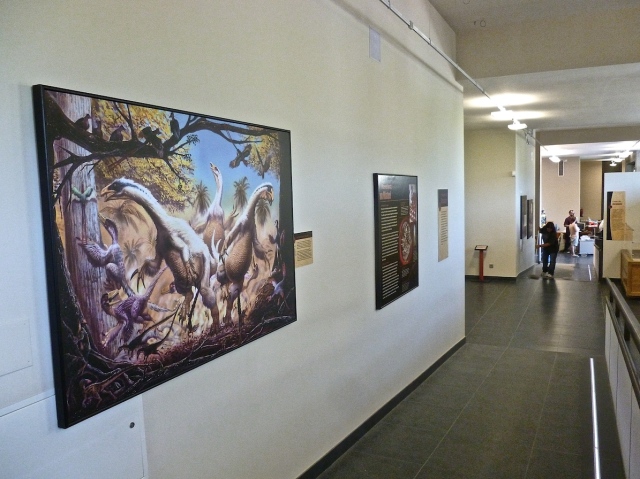 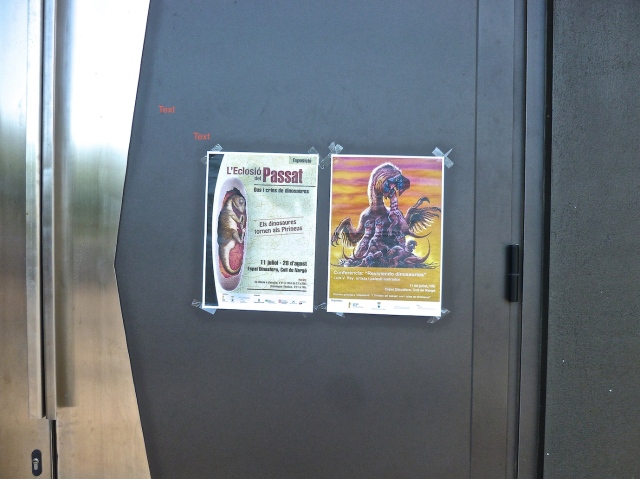 The exhibition  double whammy (Coll de Nargó now and Sabadell – a town nearby Barcelona-in September) is happening thanks to the efforts of  the team of Angel Galobart, head of research of the Mesozoic at the Catalonian Institute of Palaeontology Miquel Crusafont.  Angel has been in charge of many an excavation in the zone of the Coll. They have protecting the sites from the odd act of vandalism… and needless to say he certainly knows how to find a dinosaur egg: even while we were there he  and Pere Figuerola  casually found some egg shells in situ and in front of our very eyes! 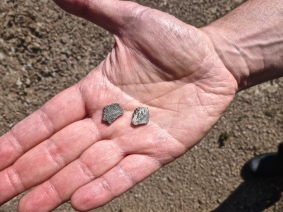 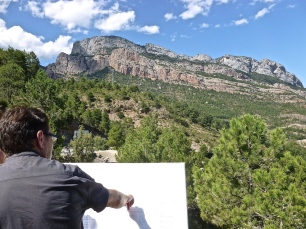 I was pleased to see one of the many sites ornamented with excellent cut-out metal silhouettes  to remind us what would we be seeing there in the Cretaceous… a titanosaur: 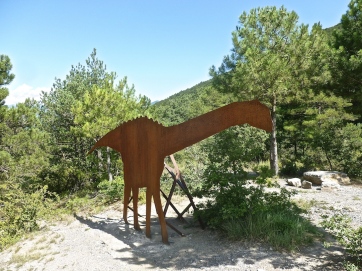 And a beautiful dromaeosaur pair attacking a hadrosaur… anatomical seal of approval from me! 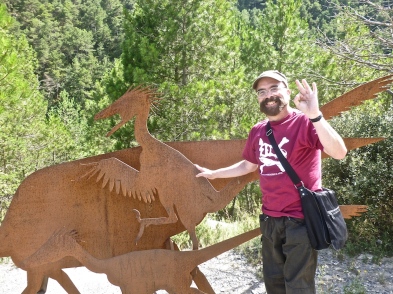 But the opening  and the talk that followed were my main tasks. 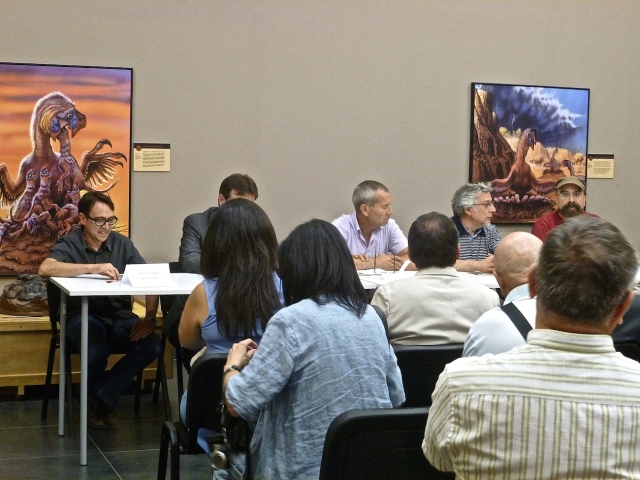 Framed by my oviraptors, here I was at the opening of the proceedings having the honour of representing Gondwana Studios. From the left: Angel Galobart, Josep Ramon Ibarz, Benito Fité (Mayor of Coll de Nargó), Josep Borrell and yours truly . Not only was important for the small village, it was quite an event for the whole region and the occasion was seized in order to promote Coll de Nargó as an important touristic landmark! How far new dinosaur discoveries can take even the smallest village? In the seventies and eighties, Catalonia and Spain as a whole had virtually no importance as a purveyor of Dinosaur sites of the world… now they are really relevant! Look at these eggs in cross section that can be seen in situ! 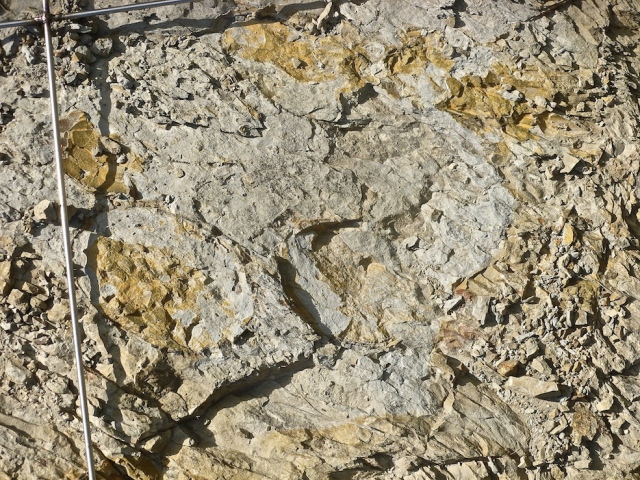 And needless to say… the real thing is kept  in  exhibition as yet another attraction to the Espai Dinosfera… a clutch of perfectly preserved titanosaur  eggs. Not many skeletal remains in the area, but many, many eggs… and interestingly enough, they belong  to mid-size species similar to the saltasaurs portrayed in the Hatching The Past exhibition. 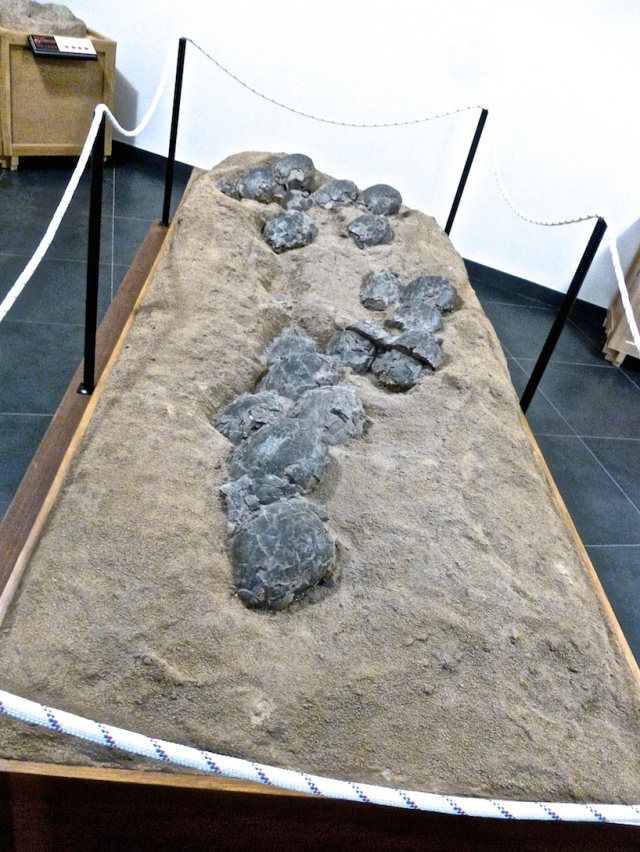 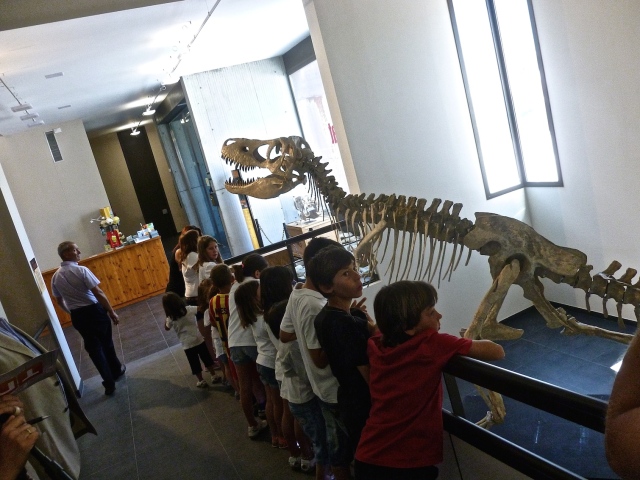 The exhibition opened and the kids were the first to flock in,,,, I took the opportunity to have some 3D fun with friends… here’s Monica Ferré and her son, Bernat,  checking out  “Dinosaurs In Your Face”. 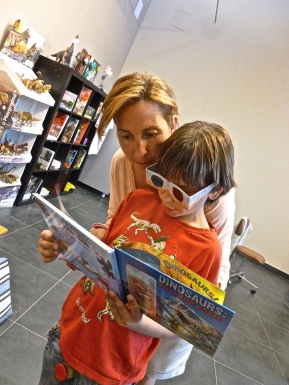 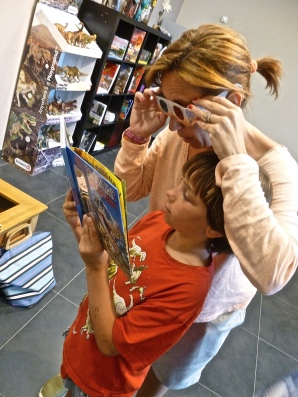 I was really looking forward to repeat my experience in Asturias with the talk “Bringing Dinosaurs Back To Life” (here known as “Reviviendo Dinosaurios”). The museum is not massive (in fact now is entirely dedicated to Hatching The Past), so we had to give the talk in one of the exhibition halls… more than sixty people crammed the space and it was quite a success! The people were  attentive and responsive… hopefully I  have changed the mind of more than one about the old image of dinosaurs.Here is the introduction by Pere Figuerola 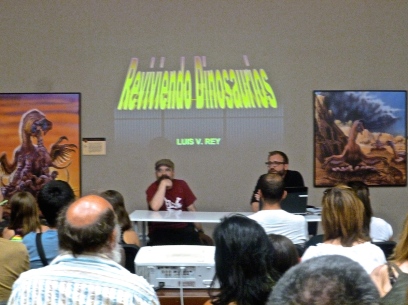 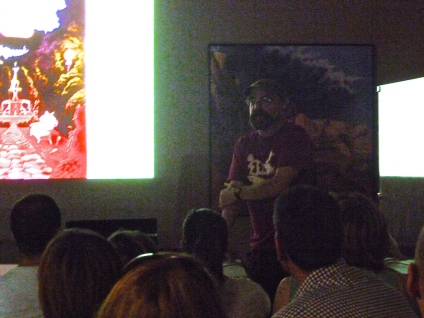 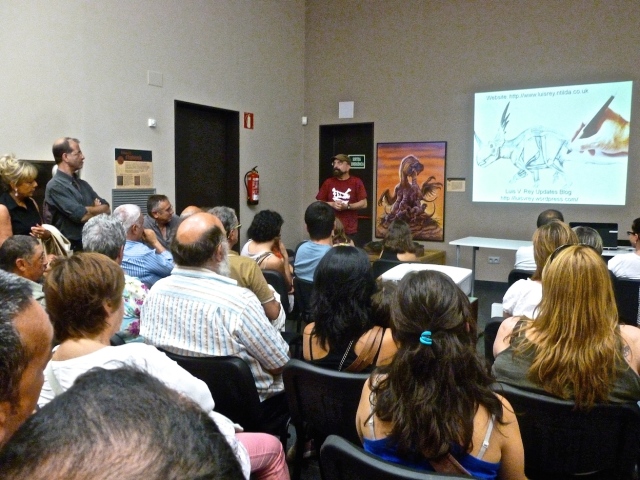 Our thanks are especially extended to (among many) Mar Gómez (Peter’s partner), Pere Figuerola, Monica Ferré and specially Angel Galobart for their invaluable support and hospitality. Needless to say, yet another complete and successful experience thanks to the efforts of Gondwana Studios and the Palaeontological Institutions in Catalunya… and we are all grateful for that! 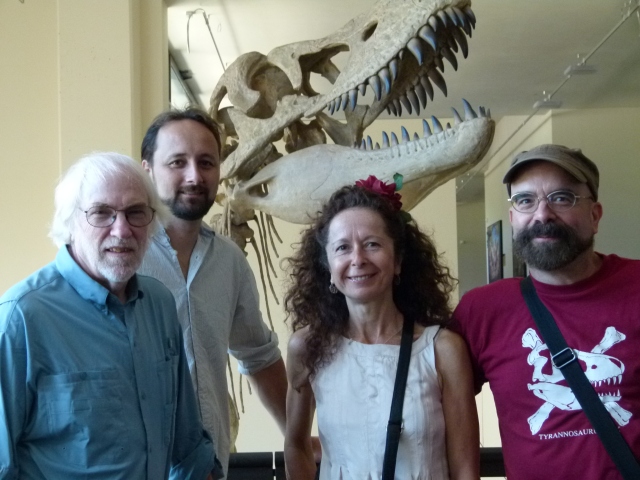