SVP at LA… a personal chronicle. 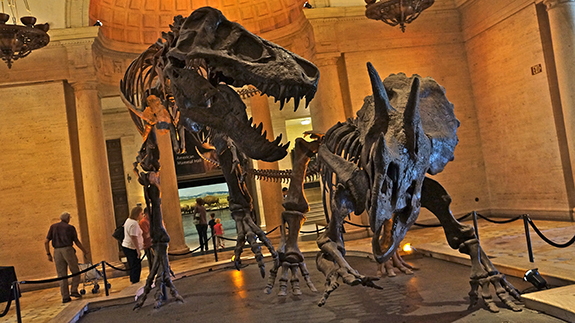 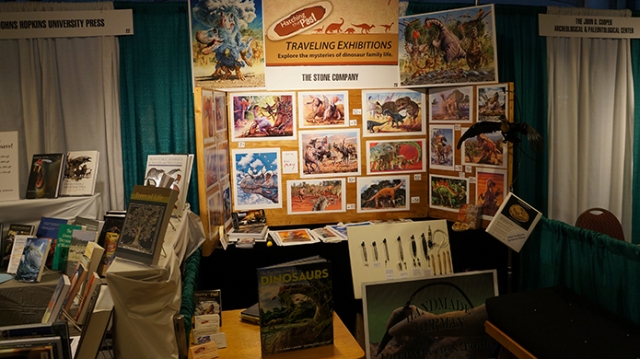 It was a double whammy returning to LA and SVP at the same time. It’s been a while since my last Society of Vertebrate Paleontology meeting …and even longer while since I last had visited Los Angeles… In ’76, it took me two days in a sweltering bus to go to LA from Mexico City to witness the then golden age of Led Zeppelin (“The Song Remains The Same” opened the previous day to my arrival) and the start of the remodelling of the modern La Brea museum… needless to say the L A County Museum was also in a rather primitive stage!  So I had great expectations, most of them fulfilled. The annual SVP meetings are always “family” meetings, no matter in what part of the world you have them and this was a long overdue reunion with some dear friends.

This time Carmen and I  were not just a lonely presence trying to sell some handmade posters:  my friends of Stone & Company and specifically the indefatigable Florence Magovern (in this picture with Carmen Naranjo, my partner) had organised a wonderful stall at the venue with quite a few of my things (including the newly released Golden Book and the Encyclopaedia) and I would be sitting there, signing  and presenting them… the prints this time looked amazingly professional, in different sizes and mounts, always at a vey high  quality level.   The stall quickly became a gathering place at the meeting and I soon understood that it would be impossible to “sit”…in the process I lost my voice talking non-stop to so many good friends, palaeontologists, budding and veteran paleoartists and everybody else from 8 in the morning ’till eight in the evening(and beyond) every day.

But the (probably ) greatest highlight was the visit of Dr. Thom Holtz (dressed as Dr. Who… yes it was Halloween time!) that graciously agreed to sign a few copies of our Dinosaurs, The Most Complete Encyclopaedia…(Random House)… yes, for the first time we were reunited in public with our work in our hands!

Needless to say the superstars of PaleoArt were present all over the meeting… here I am with the legendary William Stout (who traded me some of his new magnificent -signed- books for  a copy of the new Golden Book… including even a book on his favourite Blues Legends (a labout of love in his own words)! And the also remarkable Mauricio Anton  from Spain…the indisputable modern master of prehistoric mammal illustration! 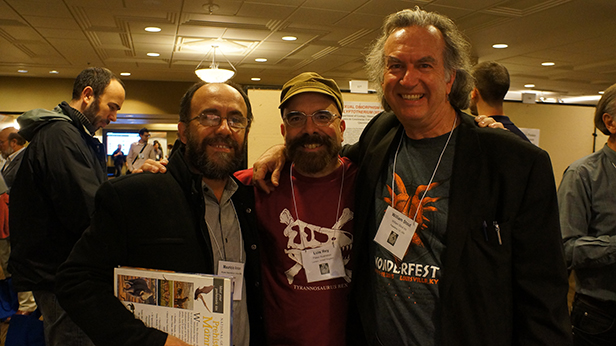 Scott Hartman was a prominent presence giving me some anatomical advice as usual …Darren Naish had come from England  and I forced him (very reluctantly, you can see his displeasure) to endorse the Big Golden Book!

Even Jim Kirkland, Greg Paul, Jim Farlow and the excellent Japanese paleoartist Hirokazu Tokugawa (of Drepanosaur fame) had fun with  “Dinosaurs In Your Face” 3D

The fun was everywhere.. I managed to finally know what it is to wear a tail… and disguise as dad Oviraptor (using the same costume that kids wear when they visit the mural/nest playground of “Hatching the Past“) to attack any intruders including Duane Nash (with his ?Carnotaurus tail!), Sharka Tulu, Octavio Mateus (the main palaeontologucal attraction from from Portugal and indefatigable supporter of paleoart)  and the unfortunate Dr. Phil Currie that happened to pass by and was victim of my wrath while Florence Magovern watched helplessly! 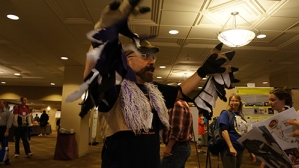 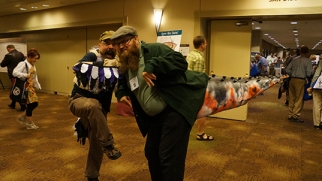 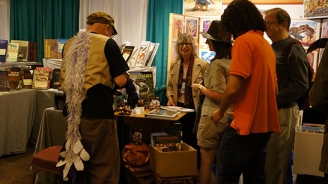 Hundreds of posters and talks took place… can’t pick too many here so for me the highlights were (for me at last) the talk by Ken Dial and his practical sampling of modern biology as applied to Palaeontology… the man is a hero of mine since he did his Wing-Assisted Incline Running and the Evolution of Flight paper in 2003. This kind of presentation is what makes Paleontology not just about old bones, but about living animals… and yes,  the star of the whole meeting: finally the detailed revelation of the complete skeleton of Deinocheirus. For a long time only the arms were known, and now we have the whole animal… weirder than we ever thought! A kind of gigantic dinosaurian dromedary… yes, the hump or sail on its lower back (just over the hips)  makes all prior reconstructions obsolete! The moment the 3D flesh and feathers restoration started to rotate on the screen at the auditorium there was an spontaneous burst of applause!  Expect much more from me regarding a new proper restoration… I can’t wait to get hold on all the information when published! In the meantime, since there are still pictures of my old restoration of Deinocheirus circulating in the internet, I have done this quick redraw of that old piece… please take it as “preliminary” to say the least… it’s based on my own notes taken from memory of what I saw!  I know that all the skeleton is available but part of it is still in private hands. What I can say (based also on some other photographs I’ve seen) is that in my old restoration at least I got the head more or less right!… strange animal, a mega-ornithomimid beyond any expectations. 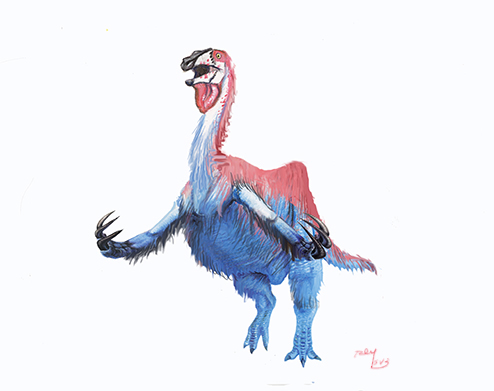 We donated some posters and books for the final auction that want for very good prices. Predictably,  being close to Hollywood the theme for the costume of the auctioneers was going to be: Monsters of Filmland! Strangely enough, none of Spielberg’s Jurassic Park  monsters participated! 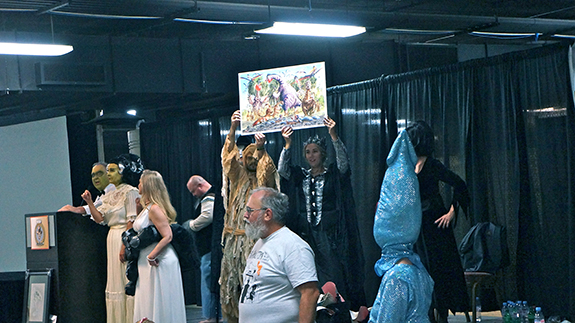 And here’s the lucky winner with my favourite Therizinosaur Rookery poster.

Neither the La Brea museum nor the newly refurbished dinosaur hall at the LA County Museum  disappointed of course.  In La Brea where we were lucky enough to have a sneak guided visit to that temple to trapped mammalian prehistory (and some giant flying dinosaurs too!) and even visited some of the million=bones excavations in situ (courtesy of Luis Chiappe’s official duties). The museum was spectacular with its giant felids, an entire wall of dire wolf skulls and wondrous megatheres and mammoths…

…and then we went to the LA County Natural History Museum: not just one but three times! An enormous amount of dinosaur skeletons were highlighted by the Tyrannosaurus life cycle.

And the emblematic entrance of the museum, inspiration of many including my cover form “Dinosaurs In The Round“. It was good to actually meet the inspiration face to face.

Finally I’d like to thank the heroes and friends of the StoneCo team: Flo and Charlie Magovern,  Alanna Magovern and Nic Regester, the unstoppable, relentless engines of it all. Also special thanks to  Scott Hartman, Mike Keesey, Darren Naish, Mike Habib (our gracious and generous paleoart entertainer… wonder when we will get the same treatment from the SVP organisation  itself!), Anusuya Chinsamy, Julius Csotonyi, Diana Pomeroy, Constance Van Beek, George Callison,  Donna Braginetz and Mark Kaplowitz, and everybody else that were always there for us… your support has given a meaning to everything!

Here’s the end: Alanna and Nic, the masters of logistics showing what they excel at. 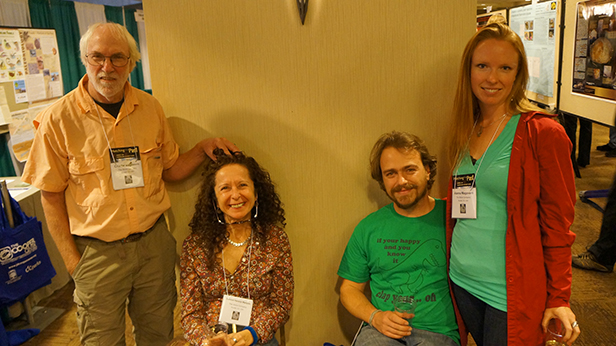 NEXT STOP: I WILL SEE YOU IN MEXICO CITY!

1 Response to SVP at LA… a personal chronicle.