This is part of an ambitious future project  with John Hutchinson that might develop in something really interesting. I showed this illustration to someone that replied “what is that weird squirrel?!”. Now, you must agree that at the level of weirdness this probably takes all the awards. Recent discoveries have changed our image of heterodontosaurs for ever! This is the way Heterodontosaurus was portrayed in Random House’s “Dinosaurs: The Most complete, Up-To Date Dinosaur Encyclopedia” by Thom Holtz and myself:

The discovery of Pegomastax and Tianyulong made this a thing of the past and transformed not only our image of heterodontosaurs but also of ornithischians too… yes that famous “porcupine” Psittacosaurus -that I broke to the world in an illustration for my book “Extreme Dinosaurs!”  done well before the year 2000- doesn’t look that weird any longer. If we consider that the newly discovered, extremely fuzzy heterodontosaurs are actually quite ancient (lower Jurassic)  ornithischians, this  testifies to the extraordinary diversity of the Dinosauria in the 169 million years of evolution, and a probable  wild range of different kinds of metabolism, associated not only with posture but covering (Insulation? Defense? Display?) integument too. It might be that the animal was even venomous too! Not that this is anything new, only that corroborates what some of us have been thinking since the 60’s and 70’s. The fibrous and fuzzy integuments date back to the origin of dinosaurs and are not exclusive to the evolutionary branch that gave origin to birds!

The strange spiny look in Ornithischia  was probably a common feature right from the start and kept evolving in animals like the fibrous, porcupine-like psittacosaurs  and  probably in the newly discovery integument of Triceratops too (more on that in a future post). Was it in any way related to the fuzzy integument that gave rise to proto-feathers  and feathers in theropods and birds? I would  say yes… but in a completely different way.

Here’s the old illustration that started it all (modified to show also Sinovenator the troodontid). I still have somewhere a sketch where I ventured a Psittacosaurus fully covered in spikes and fuzz… however I kept to the evidence available and never dared to to do a  fully furry-coated psittacosaur (after all there’s also evidence of pebbly skin for them)… except perhaps for the babies! 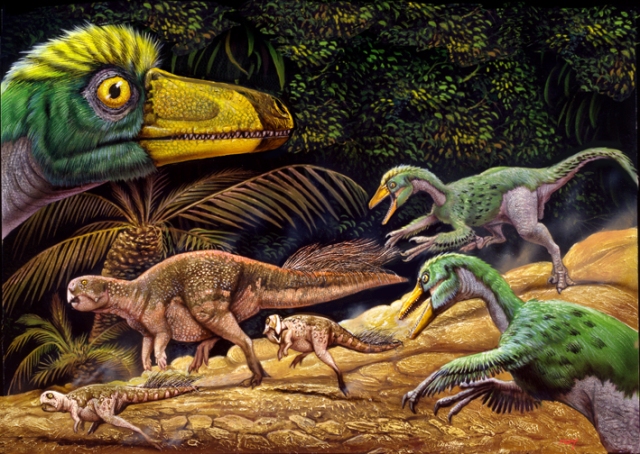 4 Responses to Heterodontosaurs now and then…