Hatching The Past (part 2): Interactive with kids!

You may have to agree… oviraptorids never looked like this before!
I think Hatching The Past is a truly bold, didactic attempt to create a vibrant theatrical scenario for kids like I think no one has done before. 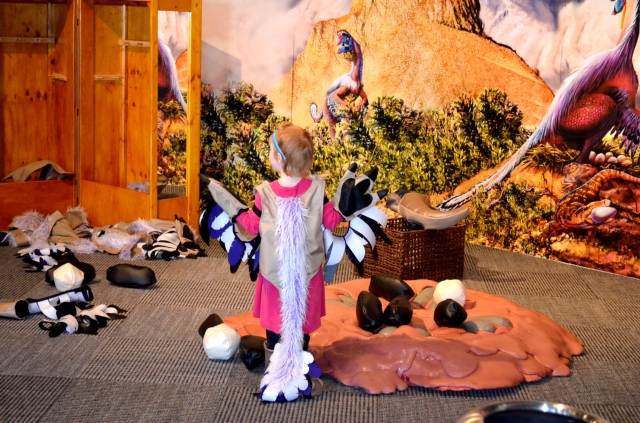 The costumes, the murals  and the props allow the kids to recreate a dramatic scene that helps them imagine that they can be part of a real world that  happened 75 million years ago. The main thing is after all to foster the sense that this is not just imagination… that the scenes they are theatrically enacting DID happen… and in the meantime change the image of dinosaurs as eternally battling behemoths into a more caring one, where they are seen tending the nests and battling the elements to protect their offspring. The Oviraptor disguise is quite stylish… and the Saltasaurus is simply hilarious… now, if only humans had a longer neck.. and smaller head!

Paleo Illustration
View all posts by luisvrey →
This entry was posted in Dinosaurs, oviraptorosaurs, Sauropods and tagged Hatching The Past, Oviraptor, Saltasaurus. Bookmark the permalink.