The Murals for Hatching The Past.

This expanded  and modified version of my nesting oviraptors (Citipati) facing the storms in Mongolia is part of the trilogy I have devised for the ambitious itinerant exhibition Hatching The Past that has been organised by my friends the Magovern family from Stone Company. Picture this one at 3 meters high by around seven or eight long.

The second mural is this: another modified version of a familiar scene of the Saltasaurus  nesting grounds from South America. It is similar in sized and both are  backgrounds for parts of the exhibition that will serve as children playground areas. 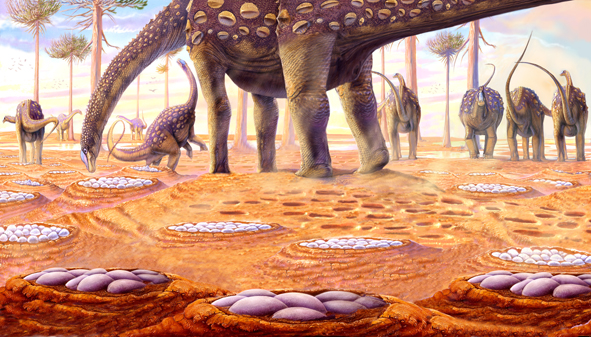 In case the exhibition comes anywhere near you, don’t miss it… it’s worth visiting! You get a lot more than just fun and murals, there are casts in abundance, it is well researched and informative and you will see real fossil nests. For more information contact  the Stone Company website.

I have just received this information directly from them:

“Hatching the Past is the overall exhibit name and Dinosaur Eggs and Babies is the most used subtitle.  Hatching did not translate well into Spanish so our Monterrey, México exhibit is Dinosaurios, huevos y bebes; Encuentro con el pasado. This exhibit is the only one currently running and will close September 23rd.
Our next opening is in Eastern Tennessee on September 15th.  We hope to be adding the prototype play area with full size oviraptor background to this venue.   The grand opening of the full play area and dinosaur nursery is planned for March 1st, 2013 in Amarillo, Texas.”

The third mural I did for them is a lot more ambitious… you may have noticed the picture that is at the header of this Blog. Well, now imagine it life size! Yes the final results became a piece that is around three meters tall by seventeen meters long with the big dinosaurs motherly looking over you and your own offspring… the mighty computer files had to be retouched to the last detail. All the dinosaurs were done in the same new style that will be prominently showcased in the next Bakker/Rey, Random House project due out very soon.

Here are a couple of isolated examples: no exhibition about dinosaur eggs and babies would be complete without Maiasaura…

And a late-minute rendition of Triceratops. 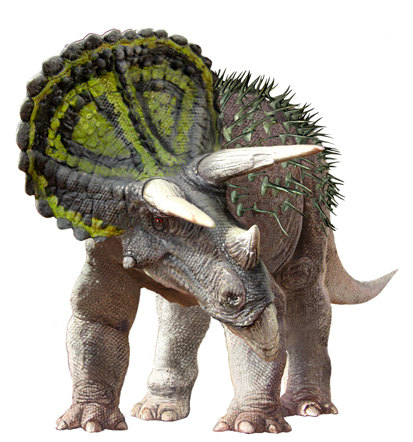 You may also have noticed that I incorporated some new information regarding the skin topography of Triceratops… the recent discovery of extensive fossilised imprints of Triceratops skin also teach us how little do we know about the external appearance of these incredible beasts… the scales around the neck of Triceratops are big and square and with that mosaic of spikes it may have looked  like a shielded, beaked,  horned , oversized hedgehog!

4 Responses to The Murals for Hatching The Past.